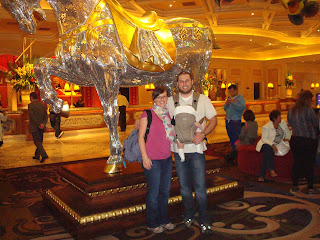 Birdwell Three at the Bellagio

Part of my Christmas present from Adam was an eight-day vacation to Las Vegas, Nevada and Park City, Utah. Taking a total of five flights and traveling into two different time zones with a five-month-old always makes for a memorable adventure! William is such a great tourist…I guess he comes by it honestly! 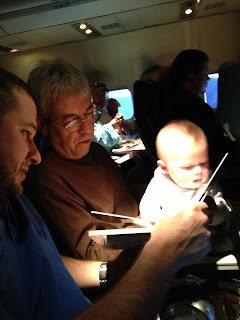 William enjoying a book on the flight


The World of Concrete is a huge (I mean, HUGE) convention Adam’s company attends every year. This year, the wives got to tag along! While concrete is super exciting stuff to some, sightseeing was a little more exciting to this girl! We were in Vegas from Monday night to Friday morning. 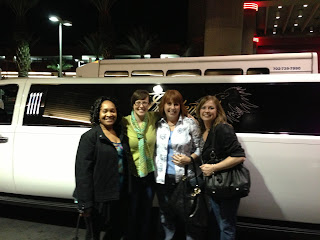 
William and I spent part of the time with the other wives, enjoying meals together at Treasure Island and perusing through the shops. One day William and I ventured over to Caesar’s Palace. He loved watching the water at the Trevi Fountain replica! 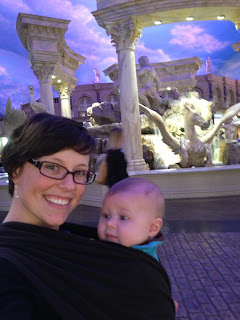 Las Vegas hotels have some of the best food around. Each was able and willing to cater to my every Paleo need.  We enjoyed the buffets at Treasure Island, Bellagio, Caesar’s Palace, and the Wynn. We also had a date night (huge thanks to Laurel for babysitting William for us!!) to a Brazilian steakhouse and Cirque de Soleil’s Love: The Beatles show. It was incredible! 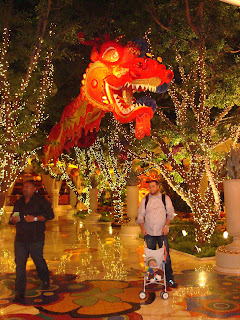 Daddy and William at the Wynn 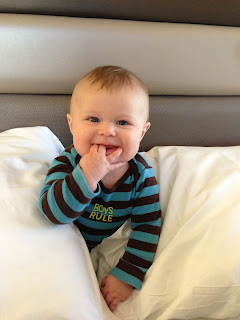 Having a blast in the hotel bed, practicing sitting up!


After a few days of fun in the Vegas sun, we flew to Salt Lake City, Utah and drove to Park City (William slept the entire flight). It was our first time there, but it probably won’t be our last! In addition to skiing and snowboarding, Park City has so many fun activities to partake in! We went to a cool museum of the 2002 winter Olympic games, took William on his first train ride through Heber Valley, and shopped till we dropped at the Tanger Outlets. (Adam was snowboarding through all of these activities!) 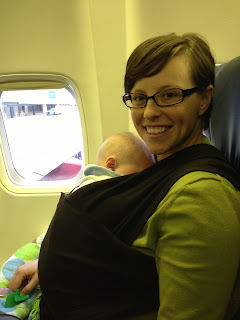 On to the next stop- Park City!


Munchkin loved all the snow! He was adorable all bundled up in his snow suit. One afternoon while he and Daddy had an afternoon together, I got to experience the Alpine Coaster (a really cool roller coaster that comes down the slopes at Park City Mountain Resort), zip lining, and the Gorgoza Tube Park! It was epic- Nick, Jill, and I practically had the place to ourselves! We had a blast. 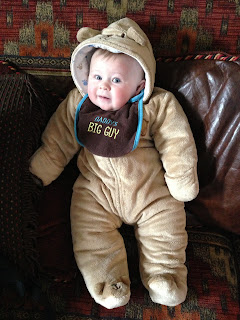 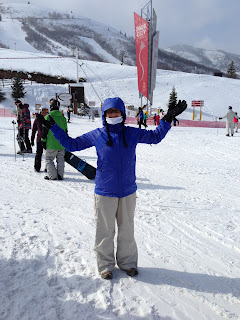 Welcome to the Slopes! 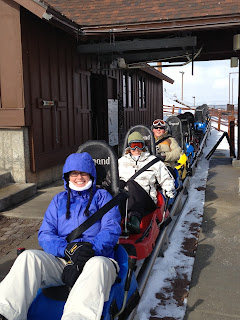 Ready for the Alpine Coaster 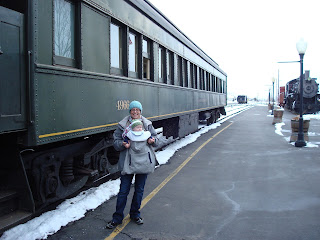 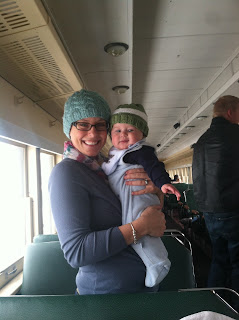 Aboard the Heber Valley Railroad! 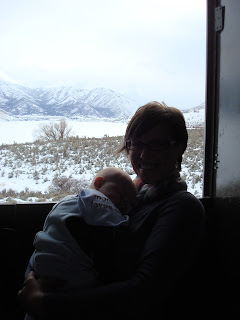 The train ride lulled him to sleep. 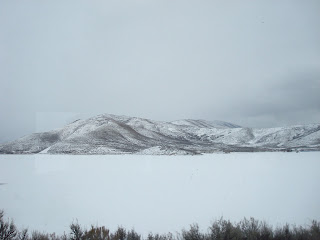 Panoramic shot I took with the iPhone! 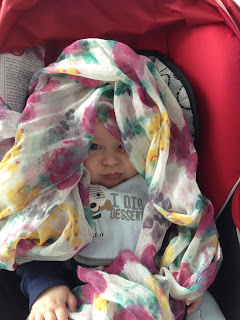 Not sure how he managed to wrap my scarf around his head...cute nonetheless!


Our last day in Park City was especially enjoyable. We went on a snowmobiling tour with Lofty Peaks Adventures in Midway. Our AMAZING tour guide was Cooper. Seriously, if you ever go there, make a special request for him to be your guide! He really knows his way around a snowmobile and the area! We got to see moose on the trail, and he took us to a couple of big “playgrounds” where we got to cut loose on the snowmobiles. This is also where I did something I never imagined I would do. 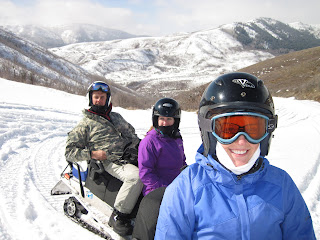 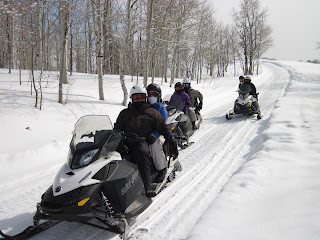 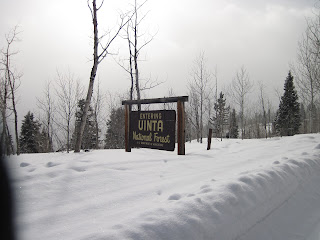 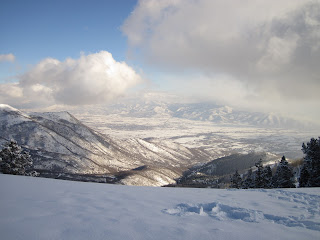 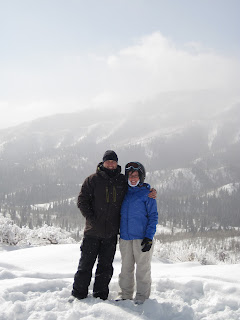 Since William is exclusively breastfed and we were on a 6-hour tour, I knew I was going to need to pump along the way.  Lunch was included with the tour, so I assumed I would have an opportunity to pump indoors during that time. Guess what? Our lunch stop was on top of the mountain!!! This left me with no choice. In ten-degree snowing weather, I unzipped all my layers, hooked up to the pump, and nuzzled in as close to Adam as I could get for 20 painfully chilly minutes! Yep- I pumped my son’s dinner in the great outdoors. Luckily, we were in a state park, so there was a restroom shelter available. It was locked up for the winter, but I still took advantage of the slight shield the entryway provided from the wind. Unfortunately, I never got my body heat back after that, so five hours into the tour I decided to throw in my hat and call it a day. Temisha and Jill had also had their fill, and we could tell the boys really wanted some “guy time” on the snowmobiles. Cooper, being the awesome guide he is, led us all back to the base and dropped off the ladies. Then he took the guys to some serious “backwoods” for slightly more adventuresome riding. They all came back in one piece, and everyone had a blast. It was worth every penny! 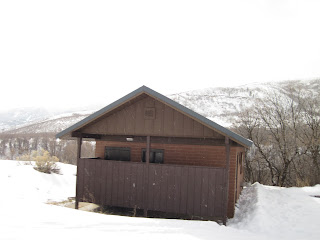 Yep...that's where I pumped! It was sooooooo cold!!! 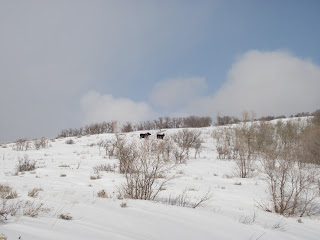 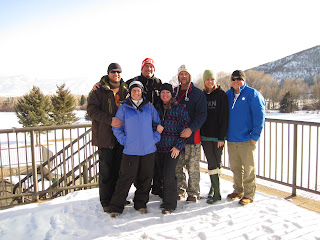 Our awesome guide Cooper is in the red beanie!


None of this trip would have been as smooth and easily coordinated without the help of my new friend Marcella. We found each other through a private Facebook group for moms. She helped me find babysitting in both Las Vegas and Park City through mutual friends, and she gave us great tips for where to eat and things to do in Park City. She even loaned me baby gear essentials- a car seat-adaptable stroller, activity mat, pack n play…if I needed it, she had me covered! Our last night there, she joined us for dinner and we met for the first time. It was like meeting with an old friend! We enjoyed dinner together before we had to head back to the condo to pack our things. 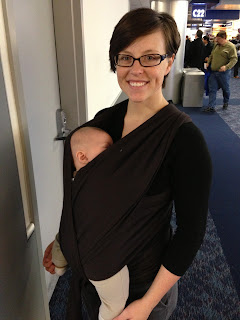 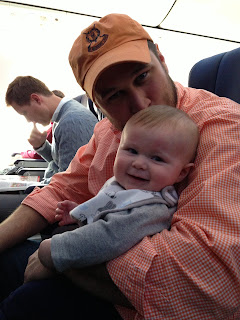 On the plane, ready for takeoff! 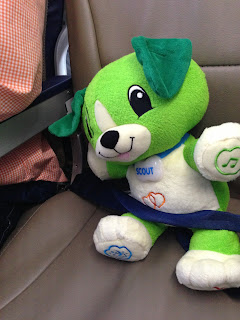 Scout did well on the plane, too!


All in all, we had an incredible vacation. Adam is such a great travel planner, and every trip offers new adventures! William did so well being away from home for such an extended period, but just like Mom and Dad, he was happy to be back in his own bed when we got home (and after a week of interrupted sleep, we were happy to have him back in his bed as well)! We don’t have our next excursion on the books just yet, but we do have all of William’s passport paperwork completed and ready to turn in! I see an international destination in our near future! 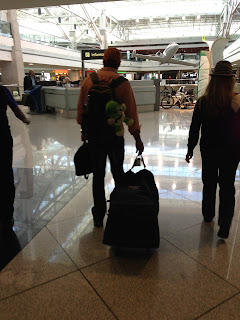 Daddy of the Year- toting Scout clipped to his backpack, rolling William's car seat, and lugging my pump bag in his other hand!