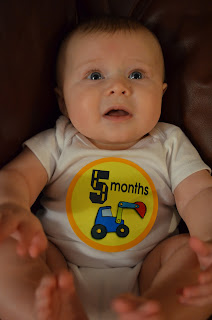 Another almost entire month has gone by since my last post...and I have no idea where it went! I think about my little blog often, dreaming of all the things I'd love to pass along to my readers. We've been eating very well in the new year, Paleo style- I'd love to share some of those with you. . . in due time, I suppose! This entry will not be about food. It will be about the reason most of you are here- the Munchkin! 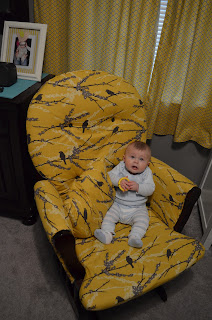 Well, he's more formerly known as the Munchkin and more recently known as Chunky Monkey. We still can't get over our little Butterball! I almost devour him and all his little rolls daily. He turned 5 months old this week. The fourth month of life was none too kind to him. He had a slight reaction from his immunizations (low-grade fever, very clingy and sore for a couple of days), and within days following the shots he began teething. Drool has been nonstop, which was part of what tipped us off, but the bigger indication was the death grip he started putting on our fingers with his gums! I promise you, teeth or no teeth- I thought he was going to draw blood a couple of times! At any rate, it's been a month of teething, yet no teeth are in sight. From what we've heard from other parents, he could keep this up for several months. Honestly, as long as I'm nursing, I'm OK with him not sprouting any this early! Another side effect to the teething has been snot. Lots and lots of snot. The NoseFrida has become a great friend of mine (and a foe of William's)! 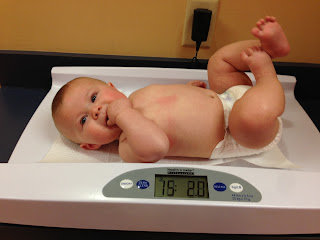 Enough about his teeth. Other WONDERFUL things have been happening as well! He still hasn't rolled over, but he has found his feet! He loves to play with them while we change his diaper. He is also excellent at blowing raspberries and carrying on quite a long babbling conversation with anyone who will listen. We also went on his first trip to the zoo, even though he slept through all of it. His back muscles are developing nicely too- he sat up unsupported for a whopping 12 seconds last week! Tummy time is also more enjoyable now that he can prop himself up on his arms and see everything around him. 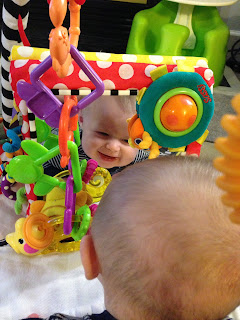 One of my favorite "firsts" for William was introducing him to HOCKEY!!!! This momma was one happy camper when the NHL lockout finally ended and we got to go to the season opener! We bought William Baby Banz protective ear muffs to wear. He did really well at the game, and had good company with his buddy Ant Man in hand! If only the Preds had won that one... 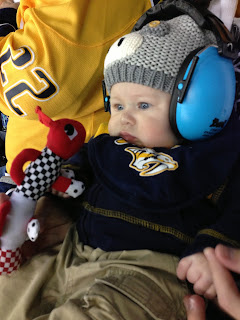 Another fun first has been the high chair. It's like a whole new world to him at dinner time! He's up level with Mommy and Daddy instead of being in the floor in his rocker, and he LOVES it! He plays with his toys while we get to eat (at the same time with both hands free. . . what an enjoyable experience)! He also likes sitting in it while I cook dinner. I call him my Sous-Chef de Cuisine. :) 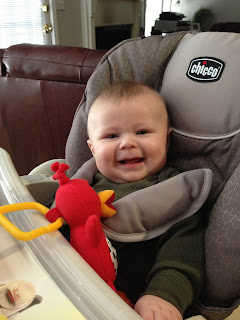 We had a scary incident just this morning in the high chair, though. He was playing while I waited for my hot tea from the Keurig when all of a sudden he began choking. In the time it took me to turn around, his face went from pink to red to purple and I went into Mommy Rescue mode! I jerked him out of the high chair, flung him upside down over my knee like I learned in my infant/child CPR class, and gave him several firm blows to the back. Out came the culprit- (this is gross, FYI) a dime-sized chunk of phlegm followed by a 6-inch stream of snot erupted from his throat! I turned him back upright, he cried out for about 2 seconds, and then he gave a big, open-mouthed "Thanks, Mom" grin. Let's hope that's the last time I ever have to perform the Heimlich. That being said, if you're not certified, I highly recommend you take a class or at least familiarize yourself with what to do. 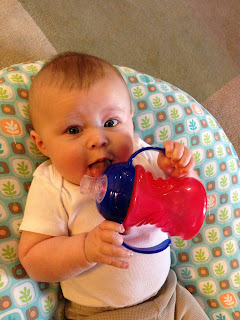 To end on a happy note, we are going on a winter vacation!! William is all geared up for his second flight, and I have a decent handle on what to take and what to leave at home this time. We will be tagging along to Las Vegas for Adam's work trip (the World of Concrete Convention) for a few days, and then we're making a stop in Park City, Utah for a few days of fun in the snow. Oh, and if you happen to know of affordable babysitting options on the strip in Vegas that I'm not aware of, please comment or email me! While I'm sure the women with Dial-a-Granny are wonderful, no one is worth $55 per hour to watch an immobile 5-month-old! I'll be sure to give a full report of our vacation more promptly than I have been doing (and before his next monthly milestone comes along)!! Au revoir!
Posted by Unknown at 6:05 PM